CJC-1295 is a derivative of human GH-releasing factor. HGRF is a 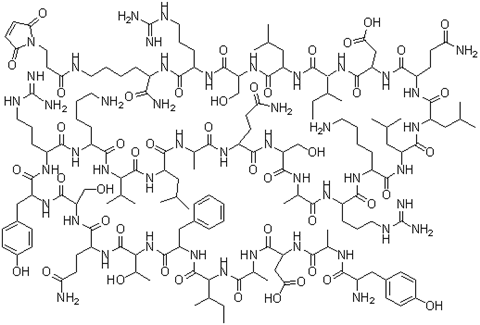 naturally occurring peptide that is actually a truncated form of a larger peptide that binds to the growth hormone secretagogue receptor (GHS-R) and causes the release of growth hormone. Because of the way CJC-1295 is engineered its half life had been extended from ~7 minutes to greater than 7 days. Consequently, CJC-1295 injected 1-2 times per week results in elevated levels of Human Growth Hormone (HGH) and IGF-1.

Clinical research was first conducted for CJC-1295 during the mid-2000s with the collaboration of TheraGenesis. The objective was to treat obese AIDS patients with visceral fat deposits, as increased levels of exogenous hgH are presumed to increase lipolysis. The clinical research was ultimately successful for most research subjects.