The use of Holmium:YAG laser technology to promote angiogenesis in patients with severe angina 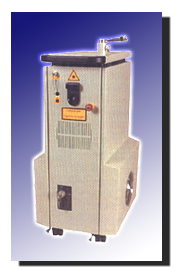 pectoris was pioneered by TheraGenesis in studies conducted in Germany, Austria, Spain and Sweden. This development included both Percutanteous Myocardial Revascularization (PMR), as well as Transmyocardial Myocardial Revascularization (TMR) with interventional cardiologic and open-chest cardiac surgical approaches, respectively. The promotion of angiogenesis within ischemic myocardium reaches back to the 1950’s, when the mechanical creation of micro-channels was explored. The pharmacological promotion of angiogenesis was postulated through modulation of the vasodialative effects of adenosine / ATP through such pharmaceuticals as lidoflazine. Today, stem cell therapy has been applied within ischemic myocardium to induce the generation of new micro-vasculature. The Holmium:YAG laser technology was shown to result in improvement of ergometric performance and attenuation of anginal symptoms.