Pantothenate kinase-associated neurodegeneration (formerly called Hallervorden-Spatz syndrome) is a disorder of the nervous system.  This condition is characterized by progressive difficulty with movement, typically beginning in childhood.  Movement abnormalities include involuntary muscle spasms, rigidity, and trouble with walking that worsens over time.  Many people with this condition also develop problems with speech (dysarthria), and some develop vision loss.  Additionally, affected individuals may experience a loss of intellectual function (dementia) and psychiatric symptoms such as behavioral problems, personality changes, and depression.

Pantothenate kinase-associated neurodegeneration is characterized by an abnormal buildup of iron in certain areas of the brain.  A particular change called the eye-of-the-tiger sign, which indicates an accumulation of iron, is typically seen on magnetic resonance imaging (MRI) scans of the brain in people with this disorder.

Treatment with an iron-chelating medication appears promising and is under investigation. 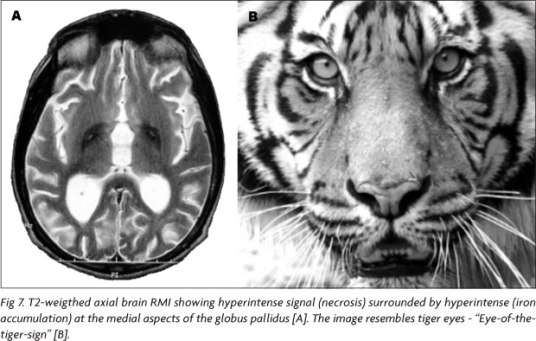